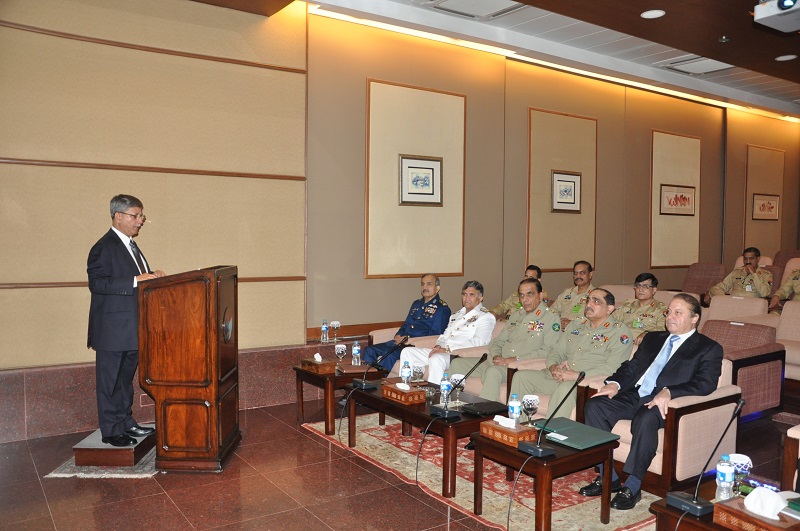 The NCA reaffirmed the centrality of Pakistan's nuclear programme for the defence of the country. The NCA reposed full confidence in Pakistan's robust nuclear Command and Control structure and all the security controls related to strategic assets of the country. The NCA paid rich tribute to the various scientists as well as security and policy level officials and diplomats who are associated with Pakistan's strategic programme.

The NCA reviewed developments at the regional level and reiterated that, as a responsible nuclear weapon state, Pakistan would continue to adhere to the policy of Credible Minimum Deterrence, without entering into an arms race with any other country. Pakistan, however, would not remain oblivious to the evolving security dynamics in South Asia and would maintain a full spectrum deterrence capability to deter all forms of aggression.

The NCA also reviewed the developments at the international level and took note of the discriminatory trends and policies that could have serious implications for Pakistan's national security and the global non-proliferation regime. The NCA reiterated that while maintaining its principled position on various arms control and non-proliferation issues, Pakistan would continue to oppose any arrangement that is detrimental to its security and strategic interests. As for the proposed Fissile Material (Cut-Off) Treaty [FM(C)T], Pakistan's position will be determined by its national security interests and the objectives of strategic stability in South Asia.

The meeting underscored Pakistan's commitment to play its due part as a mainstream partner in the global non-proliferation regime, and renewed Pakistan's keen interest in joining the multilateral export control regimes on non-discriminatory basis. Pakistan has the requisite credentials for full access to civil nuclear technology for peaceful purposes to meet its growing energy needs for continued economic growth. The meeting noted the importance of Pakistan's positive outreach and enhanced engagement with all the multilateral export control regimes including membership of the Nuclear Suppliers Group (NSG).

The NCA emphasized that Pakistan will continue to participate constructively in the Nuclear Security Summit (NSS) process. As a responsible nuclear weapon state with advanced technology and four-decade long experience in safe and secure operation of nuclear power plants, Pakistan is ready to share its expertise with other interested states by providing fuel cycle services under IAEA safeguards and by providing training placements at its Centers of Excellence on nuclear security.