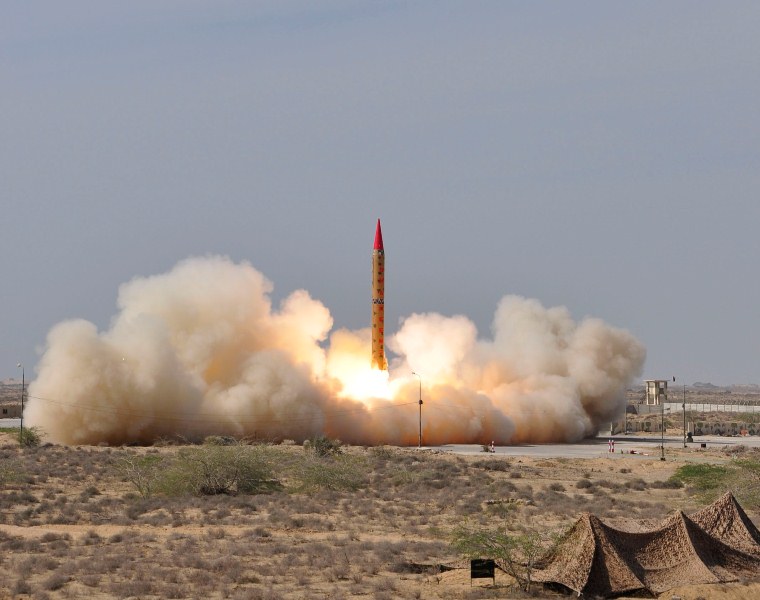 Pakistan today conducted a successful Training Launch of Intermediate Range Shaheen-II (Hatf-VI) Ballistic Missile. The successful launch was the culminating point of the Field Training Exercise of Army Strategic Forces Command which was aimed at ensuring operational readiness of a Strategic Missile Group, besides re-validating different design and technical parameters of the weapon system. Shaheen-II Missiles is capable of carrying nuclear and conventional warheads to a range of 1500 Kms.

Addressing the participant troops and scientists at the launch area, the Director General Strategic Plans Division, Lieutenant General Zubair Mahmood Hayat, congratulated them on achieving yet another milestone towards consolidation of full spectrum credible minimum deterrence. He appreciated the operational preparedness and readiness of Army Strategic Forces Command, which made the successful launch of Shaheen-II Weapon System possible. He showed his full confidence in the existing robust Strategic Command and Control System. He further reiterated that Pakistan is a peace loving nation having no aggressive designs against any one. Pakistan’s Strategic Forces are fully capable of safeguarding security of the Mother Land against any aggression.

The successful test launch and achievement of this Range milestone has also been warmly appreciated by the President and Prime Minister of Pakistan who congratulated the scientists and engineers on their outstanding achievement.