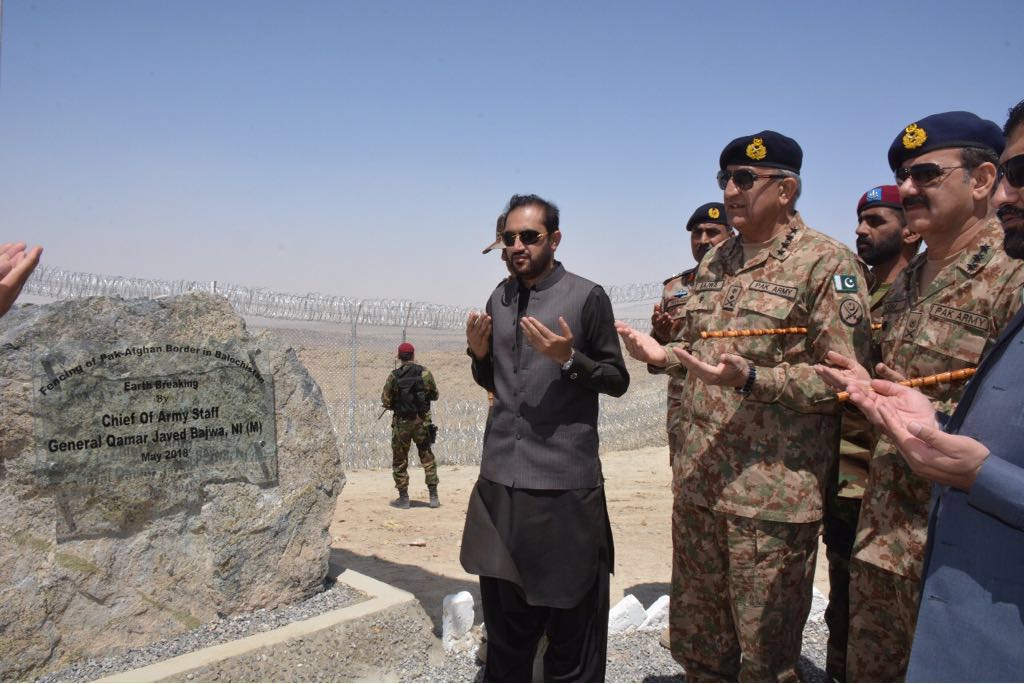 General Qamar Javed Bajwa, Chief of Army Staff (COAS) inaugurated work on border fencing along the Balochistan portion of Pak-Afghan border at Panjpai. Chief Minister Balochistan Abdul Qadoos Bazinjo and interior minister Sarfraz Bugti were also present on the occasion. Interacting with the tribal leaders and locals at the occasion, COAS thanked them for their full support and cooperation in fencing as well as their participation in maintaining security situation. He said that the fencing will check cross border movement of terrorists. However special arrangements have been made to facilitate bilateral economic activity and legal movement in any way or form through designated crossing points. CM Balochistan thanked Pakistan Army and FC for working hand in glove with the provincial govt to achieve a common vision of shining Balochistan.

At Quetta COAS did earth breaking Ceremony of NUST Quetta Campus. With an estimated cost of Rs 2.63 Bn, the campus spans over 30 acres and will house 550 students. Besides usual disciplines, it will also have fields pandering to specific requirements of Balochistan such as mining, water resource engineering etc.

Later COAS also inaugurated the Quetta Safe City Project which was held up for the last five years. It will cost 2.28 Bn Rupees. Upon completion, it will result in quick incremental betterment in law and order situation and make Quetta more safe and secure.

COAS also interacted with youth from various universities of Quetta. He said that army will wholeheartedly support the government in bringing a revolution in services, particularly in fields of education, health, electricity, water and infrastructure. He said that our aim is to ensure that Balochistan does not have to rely on any quota or special arrangement, rather, people have same level of life as they can in any other part of the country. He said that Pakistan has rejected terrorism and has achieved better peace after great sacrifices by Armed Forces backed by the whole Nation . Some elements are trying to influence the minds of our youth at this stage to create anarchy and dissatisfaction in the society. Pakistan Army will ensure the defence of the motherland in discharge of our constitutional duties. It is for every one to ensure that they abide by law of the land and remain within the bounds of constitution. He asked the youth to take Pakistan forward through devotion, hardwork and character.