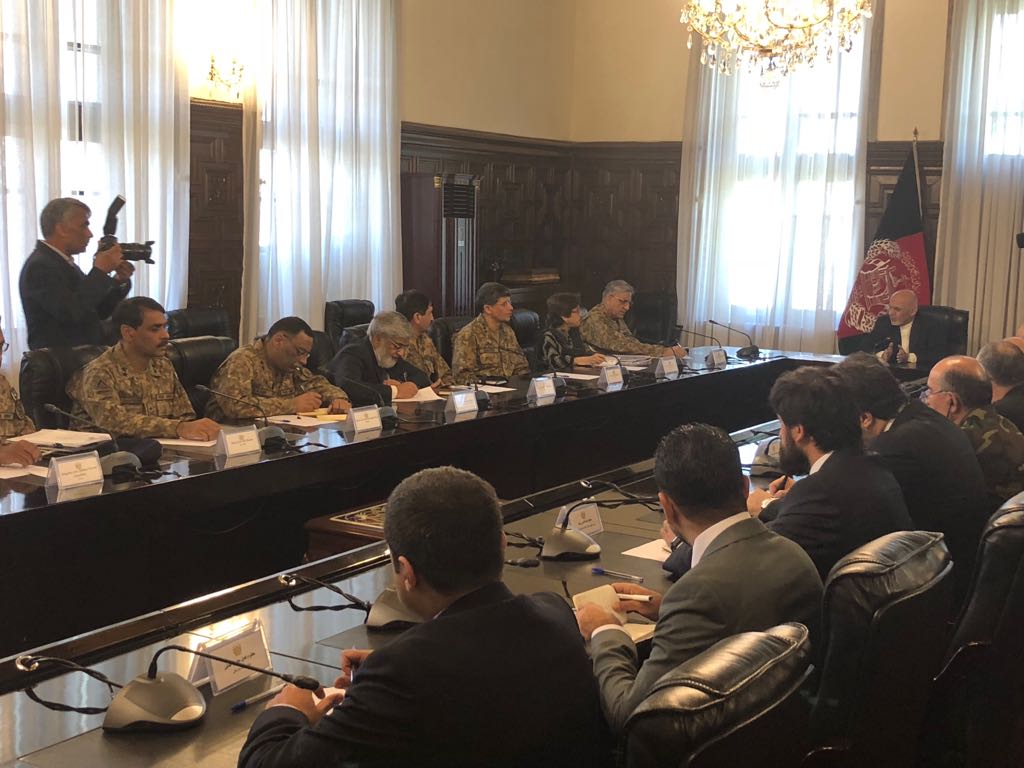 Chief of Army Staff (COAS) General Qamar Javed Bajwa reached back after visiting Kabul, Afghanistan. During the visit, COAS had exclusive one on one meeting with Afghanistan President Ashraf Ghani followed by delegations level discussions. COAS also had meetings with Chief Executive Abdullah Abdullah and Commander Resolute Support Mission(RSM) General John Nicholson. COAS congratulated Afghanistan authorities on recent peace initiatives especially in respect of the holy month of Ramadan/ Eid and wished that these steps gain more of permanence ultimately leading towards an enduring peace. The discussions encompassed wide range of issues especially the ongoing efforts for reconciliation in Afghanistan, measures needed to check rise of ISIS and the issue of terrorists taking benefit of the porous border to indulge in terrorism, smuggling and drug trafficking, being often networked together. COAS reiterated that it is the regions and not countries that develop for which peace and development remain quintessential. COAS further said that having attained relative peace and stability inside Pakistan, efforts are now focused towards socio-economic development as a route towards enduring peace and stability. COAS said that recently agreed Afghanistan Pakistan Action Plan for Peace and Stability (APAPPS) is expected to bring more cooperation and coordination between the two countries. Referring to border fencing, COAS said that this is an obstacle for checking terrorism and not between people of both sides.
Afghanistan President thanked COAS for his visit and recent security initiatives undertaken for peace and stability. The president shared contours of his vision about regional development, efforts to extend ongoing temporary ceasefire and steps related to creating conditions for reconciliation.
Chief Executive also thanked COAS for his visit and APAPPS initiative. Both sides agreed that while results of the bilateral initiatives are extremely important but even more important is the continuity of the processes to achieve the end state objectives.
Talking to Commander RSM COAS said that Pakistan desires that US/ NATO Forces must succeed and leave behind a peaceful and stable Afghanistan.
Earlier, upon arrival at the presidential palace, COAS was presented guard of honour. Foreign Secretary, DG ISI, Pakistan’s Ambassador in Afghanistan and other senior officials accompanied the COAS while Afghan NSA and senior ministers including NDS joined Afghan delegation.