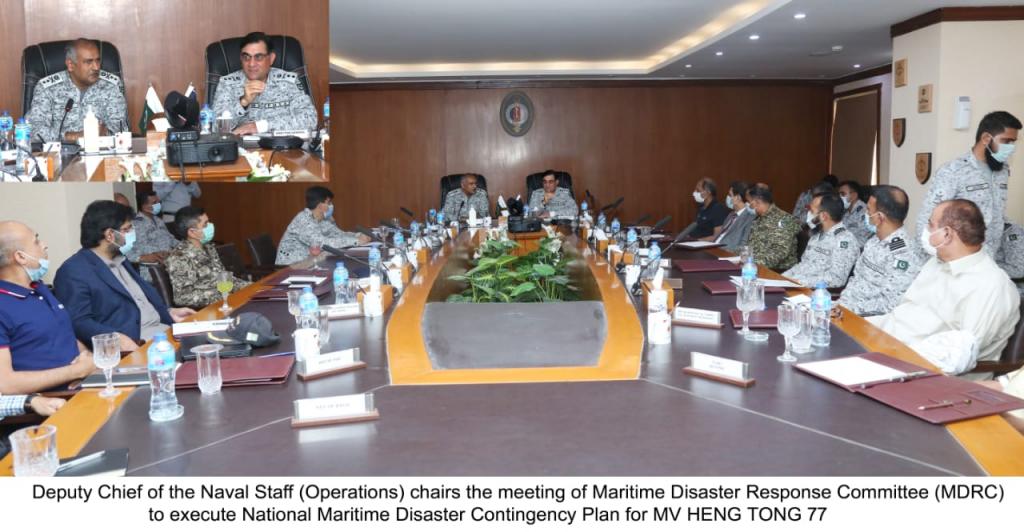 Pakistan Navy has executed National Contingency Plan (Pollution) while assessing evolving situation after grounding of MV HENG TONG 77 off Karachi harbour earlier on 19 July. Chief of the Naval Staff is the Chairman of 'Pakistan Maritime Disaster Management Board (PMDMB).

Chief of the Naval Staff has ordered to execute National Contingency Plan (Pollution) and directed Tier -1 response elements to be proactively put in place in order to minimize any possible risk of pollution from grounded Merchant Vessel.

The Naval Chief has also ordered that Tier-2 response elements (belonging to all other maritime stake holders in Pakistan) be brought to 4 hours notice. Maritime Disaster Response Committee (MDRC) under the chairmanship of Deputy Chief of Naval Staff (Operations) has also been activated to review ongoing actions and future response options.

A meeting of Maritime Disaster Response Committee (MDRC) was held at HQs PMSA today to review situation of MV HENG TONG 77. The meeting was attended by Chairman KPT, DG PMSA, DG Ports and Shipping and representatives of Provincial Govt and other maritime stake holders. An elaborate plan was formulated to mitigate effects of any untoward incident which may pose grave environmental hazard due to possibility of oil leakage from the ship’s fuel tank.

Commander Coast has been nominated as On Scene Commander (OSC) to supervise the on-site preparations to contain risk of pollution in coordination with PMSA and KPT. Anti-pollution barrier has been deployed by KPT around the grounded ship and other response elements are being mustered in vicinity. MV HENG TONG 77 is carrying 118 Tons of bunker fuel which is a source of immediate concern.

To deal with such contingencies, Govt of Pakistan has already in place a standing national organization called 'Pakistan Maritime Disaster Management Board (PMDMB)' under the chairmanship of Chief of the Naval Staff. PMDMB is the Competent National Authority mandated to execute National Maritime Disaster Contingency Plan (NMDCP) and activate Maritime Disaster Response Committee (MDRC) to deal with its various aspects such as Search & Rescue (SAR), Pollution and Salvage.

Although presently there are no immediate signs of possible oil leakage, however, proactive measures have been taken to avoid risk of any negative development especially due to rough sea state due Monsoon. The situation is critically being monitored by Pakistan Navy and all stake holders in order to mitigate against environmental hazard due to risk of marine pollution.